Miami cannibal had no human flesh in his stomach 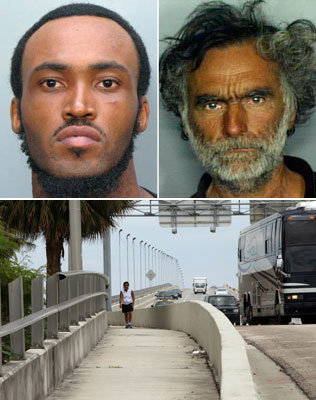 From the Miami Herald:


Miami cannibal had no human flesh in stomach

Rudy Eugene used his teeth to savage a homeless man, but an autopsy revealed he had no human flesh in his stomach.

The world is calling Rudy Eugene, who chewed off a homeless man’s face, a cannibal — but an autopsy shows there was no human flesh in his stomach.

The post-death examination did reveal a number of undigested pills in his stomach, but investigators have not identified them yet, a law-enforcement source told The Miami Herald.

A Miami police officer shot and killed Eugene, 31, on May 26 as he attacked a homeless man in broad daylight off the MacArthur Causeway, tearing off his face with his teeth. By the time police arrived, most of the victim’s face was gone. Police found pieces of torn skin on the concrete sidewalk where the attack occurred.

Fueled by the Internet and widespread interest in the macabre case, some media reports have dubbed Eugene the “Causeway Cannibal” and the “Miami Zombie.”

The chatter even led the U.S. Centers for Disease Control and Prevention to issue a statement last week denying the existence of a zombie virus, and Los Angeles celebrity lawyer Gloria Allred to hold a much-panned press conference in Miami decrying the ills of cannibalism.

Victim in ghoulish flesh-eating attack on the MacArthur Causeway identified


The victim of the vicious flesh-eating attacker on the MacArthur Causeway on Saturday has been identified as 65-year-old Ronald Poppo, The Miami Herald has learned.

His attacker, killed by Miami police at the crime scene, has also been identified as Rudy Eugene, who as a teenager in the late 1990s played high school football at North Miami Beach High.

How the men's paths crossed in such a violent act remains unclear.

More recently, court records show that Eugene was married in 2005 and divorced in 2007. According to the filing, he had no income and his assets included $2 cash and $50 for a cellphone.

His former wife, Jenny Ductant, agreed to take on the couple's debt, which included the power and phone bills.

"I don't want to talk about it," she said Tuesday when reached on her cellphone.

The man Eugene attacked remained in extremely critical condition Monday at Jackson Memorial Hospital. Much of his face was gone, the skin ripped away, the nose bitten and the eyes gouged.

What remained was his goatee and little else.

Photos of the scene with Eugene and his victim quickly went viral on the Internet Monday.

“We’re hoping that he pulls through, for his well-being, but also so he can tell us what happened,” said Sgt. Javier Ortiz, vice president of the Miami police union. “Only he knows.”

Details about Eugene's life in South Florida were emerging on Tuesday.

As a teenager, he lived in North Miami-Dade, attending North Miami Beach High and North Miami High, where he was on the football team.

The Miami Herald has obtained photographs of Eugene from North Miami Beach High yearbooks. One photograph was taken in 1997; the other was taken in 1998 when he was a junior. A group shot of the high school football team incudes Eugene.

He was killed by police on Saturday as a macabre scene unfolded about 2 p.m. on the MacArthur Causeway’s off-ramp to Biscayne Boulevard just south of the Miami Herald building. A Road Ranger spotted Eugene and his victim in what appeared to be a violent struggle and shouted on his loudspeaker for the naked attacker to back away.

One witness said he was riding his bicycle on the MacArthur when he saw a man tearing off pieces of the victim’s flesh with his mouth. After an officer approached, Larry Vega told WSVN-FOX7, “The guy just stood, his head up like that, with pieces of flesh in his mouth. And he growled.”

Eugene left behind few clues as to what could have prompted the attack.

He had just one arrest to suggest serious violence. Miami Beach police arrested him on a battery charge when he was 16, according to the Florida Department of Law Enforcement. The charge was later dropped.

He was arrested seven other times over five years. Court records show that one was for misdemeanor battery, one was for vending near a school, one was for trespassing and four involved marijuana.

The last case came in September 2009. In January, the charge was dropped.

During Saturday’s attack, an officer approached and told Eugene to get off his victim, but Eugene ignored the order and kept chewing, even after the officer shot him once.

The officer fired again, hitting him several more times, eventually killing him. The name of that officer was not released.

Security video from the adjacent Miami Herald building captured snippets of the violence as the two men — one dead, the other gravely injured and wearing only a shirt — lay on the sidewalk as officers arrived. .

Days later, the chatter, theories and questions continued. The ghoulish event even spawned a Twitter account, dubbed The Miami Zombie.

An emergency room doctor at Jackson Memorial Hospital said Eugene’s attack could have been induced by bath salts, a drug nicknamed after the bathroom product it resembles.

Police theorized earlier that it was “cocaine psychosis,” a drug-induced craze that bakes the body internally and often leads those it affects to strip naked to try to cool off.

Investigators asked any witnesses who have not stepped forward to call the Miami police homicide unit at 305-603-6350.

Even Miami police shocked by gore in face-eating attack


MIAMI -- It is being called one of this city's goriest crimes: A naked man was on top of another nude man along a busy highway, biting into the man's face, tearing it to pieces. A police officer arrived to help, but the mauler growled at him and continued to chew away, stopping only when he was shot to death.

Miami police said little Tuesday about the attack, which took place Saturday afternoon in the shadow of The Miami Herald headquarters. Surveillance video from the newspaper's security camera showed cars, motorcycles, pedestrians and bicyclists passing by.

The victim, identified as 65-year-old Ronald Poppo, a homeless man who lived under the causeway, was in critical condition.

"He had his face eaten down to his goatee. The forehead was just bone. No nose, no mouth," said Sgt. Armando Aguilar, president of the Miami Fraternal Order of Police. "In my opinion, he just happened to be in the wrong place at the wrong time."

Timeline: Here are the key moments of the attack on the MacArthur Causeway

Here’s a timeline of the key moments in the Saturday, May 26, Miami Herald security video of the flesh-eating attack on the MacArthur Causeway.

The video is from a rooftop camera on the southwest corner of the six-story Herald building. On the right center of the screen is a Herald parking garage. Above it, right to left across the screen, is North Bayshore Drive, running between the Herald parking lot and the Adrienne Arsht Center for the Performing Arts.


Diagonally across the bottom of the frame is the Metromover track. The roadway on the left is the MacArthur Causeway offramp heading west, toward the top of the screen, in the direction of the Arsht Center.

The scene of the attack, at the left bottom edge of the frame, is separated from the roadway by a concrete barrier. The view of the attack and the aftermath is blocked at times by palm trees and the Metromover track.

The video timestamp begins at 13:54 — 1:54 p.m. It’s a sunny day. Palm trees wave. Cars zip by on the causeway. The Herald parking lot sits empty. There is a person sitting in the corner of the video, near the walkway along the causeway.

13:55:00: The attacker bends down. Shadows bob and weave. The attacker leans over the victim. Shadows and palm trees hide most of the view.

13:57:22: The attacker gets up and moves. A few seconds later, he rolls the victim down the walkway and continues pulling and kicking the him for several seconds.

13:58:23: The attacker shifts the victim’s position, moving him over. He still straddles the victim and leans into him with his face. For several minutes, he comes up then leans forward and down into the victim.

13:59:37: The attacker stands up, grabs the victim and drags him further down the walkway. He drops the victim, walks around and tugs at the victim’s legs, trying to pull at something. The movement is hidden behind shadows and palm trees. But the two figures can be made out, one on the ground, the other leaning over him.

14:03:19: A second bicyclist rides by, slowing down as the bicycle nears where the attack is happening. A white car passes by and slows down, crawling by the attack scene. The bicyclist zips away, then turns around and comes back. The car moves on.

14:11:28: A police car between the Herald parking lot and the Arsht Center moves toward the attack scene. It starts to get on the MacArthur Causeway but in the wrong direction.

14:13:13: The police car arrives on the scene, driving the wrong way on the offramp. The officer gets out of the vehicle and walks around on the side of his car.

14:13:27: The officer draws his gun. The view of the shooting of the blocked by the Metromover track.

14:19:44: The victim sits up. His hands and legs are covered in blood. He’s naked from the waist down. The attacker’s legs are view on the ground, but there is no movement.

14:22:50: Three paramedics appear and hop over the concrete barrier with a stretcher.