from the Miami Herald:


Mario Perez, 36, was charged with second-degree murder and aggravated child abuse for the killing of John Brian Perez.

The baby was hospitalized Jan. 10 after Perez, who is unemployed, called 911 to report his son was not breathing. Perez told police he had been alone with his son and tossed the baby on the bed at their home, 11040 Peach Tree Dr., just east of Biscayne Park.

Hospital staff members, alarmed at the baby's bruising and bleeding in the brain, called police. The baby stayed on life support at Jackson Memorial Hospital until Saturday, when he died. An autopsy revealed broken ribs and severe brain trauma, according to a Miami-Dade police arrest report.

Two Miami-Dade officers have been shot while serving a warrant on a murder suspect at NW 7th Avenue and 69th Street in Miami Thursday morning.

One officer died on the scene. The other officer - a female - was shot and critically injured. She was transported to JMH and died in surgery according to the Miami Herald.

The officers are attached to MDPD's warrants unit. A least one suspect was also shot and is dead on the scene.


Shortly after noon officers could be seen scaling the roof of the house and attaching tarps to the roof and a fence to shield the body of the dead officer from the view of TV helicopters.

from the Miami Herald:

Investigators say they're not looking for any other suspects.

``We're asking for the community's prayers,'' said Commander Nancy Perez, who broke down when she announced the news shortly before 12:30 p.m. Thursday.

The county detectives were attempting to arrest Sims on a murder warrant for a slaying that happened in October in Miami, according to multiple law enforcement sources.

Sims, according to state corrections records, was released from prison in September on probation. He had been imprisoned for armed robbery and selling cocaine.

Details were sketchy, but this much was known: The shooting erupted between a suspect and police at a home near Northwest Seventh Avenue and 69th Street.

Castillo died at the scene. The female officer died in surgery at Jackson Memorial Hospital.

At least 35 South Florida law enforcement officials have been killed in the line of duty over the last 30 years according to this list compiled by the Herald.

One of the bloodiest days in Miami-Dade police department history occurred on April 2, 1976 when a man managed to shoot three detectives to death at a motel om Miami Beach. Neither of the three had a chance to pull their guns.
Posted by Bill at 12:04 PM 0 comments

It has been 57 years since Judith Ann Roberts disappeared from her grandparents' home in The Roads, and surfaced dead in Coconut Grove a day later.

Irving Whitman was assigned the case, one that remains cold all these years later.

``It still gets to me, still haunts me,'' said Whitman, nearly 90. ``To this day, the case remains open, technically, but I am quite convinced I know who committed the crime.''

The person in question died before Whitman could close the case. Meanwhile, Roberts' slaying became international news -- and the lone blemish on Whitman's otherwise-sterling six-year stint in the Miami Police Homicide Unit.


Police are investigating a gruesome scene, which have left a mother and son dead.

Miami-Dade Police are investigating a deadly scene. According to police, they received a call around 7 p.m. Wednesday, about a domestic disturbance. Police said a man and a woman got into a domestic dispute. The man then stabbed the woman, her son and her daughter. The subject then stabbed himself and had to be transported to Jackson Memorial Hospital. He is in critical condition. The young girl was transported to Miami Children's Hospital. She is suffering from some minor stab wounds, but is said to be in stable condition.

A mother and son were killed and two other people hospitalized Wednesday night after a violent attack in a West Miami-Dade home, according to Miami-Dade police.

When officers arrived, they found a woman and her adult son dead, Rutland said. The woman's teenage daughter and another adult male also were hurt, he said. All appeared to have knife wounds.

Rutland said it appeared the man attacked the woman and her children. Somehow, the daughter managed to escape. His relationship to the woman was unclear Wednesday night.

When police arrived shortly after 7 p.m. at a home on 133rd Place and Southwest 58th Terrace, they found a gruesome scene. The son was in the street stabbed to death and the mother dead in the doorway.

Both had foot-long gashes in their chests, police said. The victims were pronounced dead at the scene.

The attacker survived his suicide attempt and was taken to Jackson Memorial Hospital, where he remains in critical condition.

The woman's teenage daughter was also attacked and is in stable condition at Miami children's hospital.

Police, who were called about a domestic disturbance between a man and a woman, are investigating the relationship between the attacker and his victims.

"All we saw was the two dead bodies and the gashes on their chest with incisions more than a foot," witness Eric Kahlan told Channel 7 News. "It looked like it was done with a knife or something." 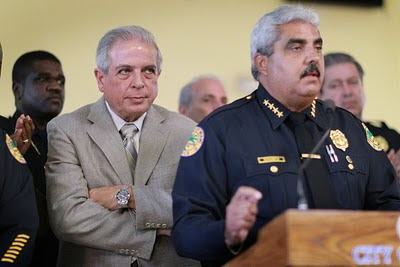 With the public and politicians clamoring for details on six fatal police shootings in Miami over the past year, the city's top cop and prosecutor are haggling -- over paperwork.

At issue: police reports, documents and other evidence that prosecutors say they need to determine if officers were justified in using deadly force.

Judging from their e-mails back and forth, there's no way to tell who is responsible for the delays, or how much documentation really has been turned over.

The list was ``hastily prepared, was inaccurate, and no doubt caused [Dunn] great embarrassment in his attempt to publicly discredit me,'' Exposito wrote Fernández Rundle in an e-mail also sent to some city officials.


A man accused of assisting in the brutal beating of a customer at a Miami convenience store has fled the country, local authorities said Wednesday.

Nabil Sulaiman, 19, was charged with aggravated battery and his older brother, 24-year-old Ragheb, was charged with murder after the two allegedly attacked Akil Larue Oliver in their Quick Stop convenience store.

Nabil Sulaiman was allowed to post a $10,000 bond after the November 18 attack and used his passport to leave the country, which is in direct violation of his bail. A family attorney said the teen is likely in fear of his safety because of the racial tensions involved in the case.

The family is originally from Palestine, but it is unclear if that is where the boy has fled.

Channel 10's story is here and the surveillance video showing the events leading up to the fatal beating can be found here.