MIAMI GARDENS, Fla. - "It went boom," said Evelyn Adon, who woke up to find a car in her front yard Saturday morning.

Haunting moments leading up to a crash that claimed the lives of three were caught on a surveillance camera.

Miami-Dade police said a Mercedes was likely speeding on NW 47th Avenue near 187th Street when it rear-ended a PT Cruiser. In the video, you can see an explosive, bright flash.

Police said the PT Cruiser landed in someone's front yard after it was thrown into oncoming traffic, colliding with a pickup truck before bursting into flames and killing two people inside.

"I tried to get them out. We were trying. The fire was too much. I wasn't able to do it," said Pena.

"My husband, my son tried to come and help them and he said the guy burned," said Juana Pena.

Family members said inside the was a loving couple, Zoraida and Mariano Miranda, on their way home from watching their grandchildren.

Family members held onto one another for support at the scene of their fiery death.

"Devastated, losing two people at a time. They have two kids leaving behind and three grandkids," said their niece, Maribel Barrios.

Down the block another man was dead. Witnesses said it was a young man who was behind the wheel of the Mercedes. The driver barreled through two yards, a fence and a light pole before coming to a stop.

"He took the water hose and was putting water to the car," said neighbor Luis Forentino.

Sight of the first fire truck appears on the video 20 minutes after the crash.

The driver of the pickup truck was not hurt in the crash.

Miami-Dade Police believe speed may have been the cause of the crash. 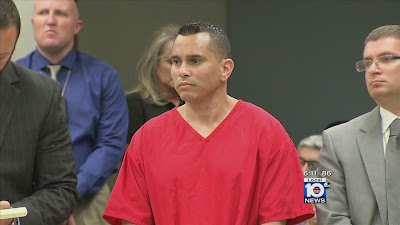